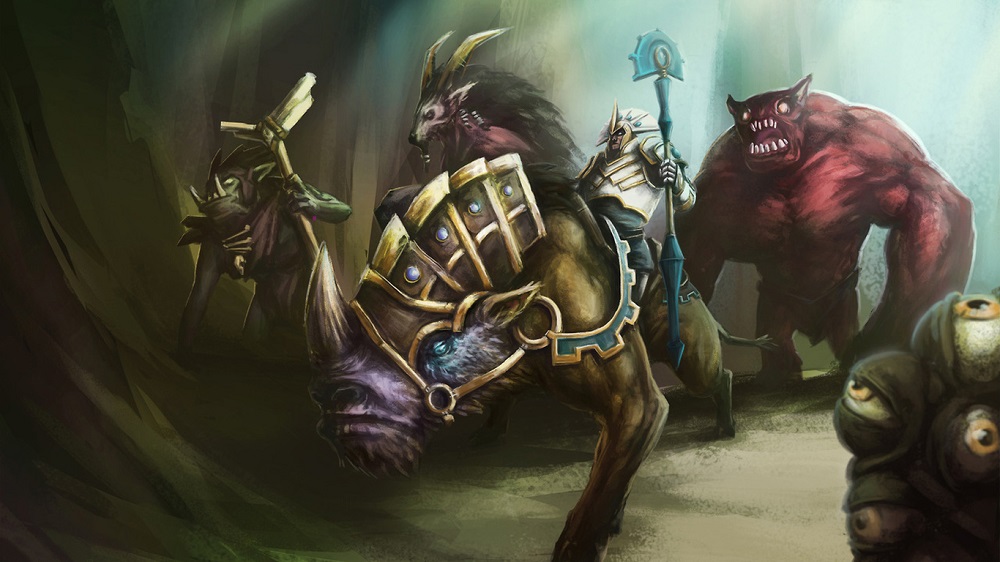 If you are paying attention to the Arlington Major, you probably understand how important Chen is for the current meta. However, unlike most other meta heroes, pubs are not suddenly overwhelmed by the influx of Chens and there is a reason for it: people tend to think that Chen is this extremely complicated hero that can’t be played by mere mortals. This is not the case and today we are going to discuss Chen, the easy way.

Chen is a lane dominating hero for one simple reason: he creates an extra 700+ HP body in lane with some damage and a potential ability. In the early game, until at least level five, this creep will have an impact, comparable to an impact of a full hero.

There are, of course, some level limitations and good players will typically attempt to block some camps and it is the reason why most Chens come to the lane with a level one Penitence and go for heavy trades. At level two, you need to make sure one of the pull camps is available and that is when shenanigans typically begin, as you can take over the enemy lane creep and as a result, push the lane while simultaneously harassing the enemy.

This might sound counterintuitive to most: holding lane equilibrium was what Dota laning stage was all about for a very long time, but it is, indeed, an old school outlook. By shoving in a wave and immediately pulling a camp, you get more experience for your lane, slowly gaining an advantage. Make sure you take over the melee creep though: the ranged bounty is a bit too high.

With Penitence your damage output on a single target with pretty much any core can be devastating and can potentially lead to a kill. That is how most Chens play their lane early, and are successful. But what if the enemy has an incredibly strong lane push themselves and/or are more than willing to trade? Here is where we need to get creative.

Chen gets to choose four more teammates, to accompany him alongside four that were randomized to him by the matchmaking algorithm. A lot of the time the ones you choose yourself are going to be considerably more useful, but choosing the right one can be a bit problematic. Here are some situations where each can truly shine.

Harpy Stromcrafter has the ability that should be called: “YOU WIN THE LANE”. It is a creep that has a 140 damage nuke on a five second cooldown and the only limiting factor is the mana pool. However, not only does this Harpy have a +3 Mana regen built-in, but it also fully benefits from another pretty broken creep. This creep can be taken with Level one Holy Persuasion, so as early as level two.

Ghost is another all-time classic. Potentially permanent 25% MS slow and 25 AS slow can be devastating early on. It is very good for chasing down targets, sure, but don’t underestimate the effectiveness of AS slow, especially early on in the game where auto-attacks are the main source of damage in lane. Chen+Ghost can trade against pretty much every single hero in the game and this option is available with level one Holy Persuasion.

Satyr Mindstealer is a creep you can’t get until level two Holy Persuasion, so Chen’s level three, but it is another lane dominating creep. You know why no one picks Crystal Maiden? Because Chen can get level four Arcane Aura at level three for your lane. Two extra mana per second would be enough to consider the crep already, but the ability to Mana Burn on top of it is simply broken. It has a very long cooldown and it is only a 100 Mana burn, but with the aura on top it creates a very noticeable resource disparity in your lane, making it trivial to win.

Bonus points if you have Harpy Stormcrafter, now with five mana regen, as well. Get Ring of Basilius on top of it and your lane suddenly gets three extra mana every second, meaning a potential 140 damage nuke every ~8.5 seconds on top of everything else.

If you don’t luck into any of the aforementioned creeps or you are facing some overwhelming physical damage, e.g. Slardar, do consider taking Ogre Frostmage. He can be a huge difference maker throughout the game and can even allow Chen to leave the lane to jungle, pull or stack, depending on the core in your safe lane.

Once you have level seven and the whole array of different creeps at your disposal, it is time to make some smart choices for how you want to approach the game. Figuring out exactly how your Wildwing Ripper needs to rotate, so that his Hurricane gets the enemy out of position and you get an immediate connection with War Stomp followed up by Vex from Fell Spirit is something we will leave for players who want to be flashy. Flashy and suboptimal, as right now Chen the lazy way is Chen the best way.

A lot has been said about the Troll camp and Rally ability from skellies, so we will not focus on it. You can push — take it. You can’t? Still take it and split push. It is still stupidly strong even after the nerfs.

The other three creeps are usually a combination of:

Centaur Courser with his zero active abilities, but a 15% magic resistance aura. You know why no one should buy Pipe of Insight in the current meta? Because they can get Helm of the Dominator for 60% of the price, get this guy and be more effective. Chen gets it for free.

Alpha Wolf with Packleader’s Aura. It is a very strong damage buff that helps throughout the game and, once again, zero active abilities. It makes your team stronger by simply existing.

Hill Troll Priest for when you want to be cheeky. With a hero that can heal this much, getting extra 15% can be very powerful. He also has a built-in active heal of his own that doesn’t need to be micromanaged as heavily as it used to.

Kobold Foreman has a very underrated 12% MS buff. It can be a huge difference maker throughout the game: not only can you rotate faster, but also can create situations where kiting enemy heroes like Ursa is significantly easier.

Finally, there are Ancient Creeps you can get in the later midgame. All of them are pretty strong, though we tend to have a soft spot for a combo of Granite Golem and Black Dragon for maximum survivability.

The last one is heavily game-dependent, but do take note that Rumblehide, the small lizard, gives you an accuracy aura. It is 40% and definitely doesn’t make up for an MKB your carry might need, but in situations where the enemy suddenly got Butterfly it can be the biggest difference maker. Especially if you have a Maelstrom/Mjollnir carry.

Finally, let’s talk about items, though this conversation is pretty short. There are very few deviations among Chen players and for a good reason: as Chen your main job is to provide strong Auras and Heal. So, naturally, you build Mekansm and typically progress into the strongest aura in the game, Wraith Pact.

Sometimes you might be forced to leave Vladmir’s Offering as it is and rush Aghanim’s: if you have heroes who are vulnerable to getting stunned, getting the Strong Dispel upgrade can be the biggest difference maker.

Other items can include Force Staff or Glimmer for when your team truly needs it. You can also get Holy Locket for maximum Heal. Lotus Orb can be an interesting choice for the very late game. In some situations

Don’t get baited by items like Guardian Greaves or Pipe of Insight. Both of them have a 1500+ gold recipe and it is simply too wasteful on a support who typically lacks money. There are good reasons why very few professional teams ever get these items, since they are incredibly cost-inefficient and on a hero like Chen this cost inefficiency will be particularly noticeable. Core Zeus, Pudge and Lesh are probably the only heroes you consider to have the Pipe against and even then there are probably better ways of dealing with them.

Do consider getting Crimson for your team in some games, though. It is a relatively cheap item players keep forgetting about and it makes many other meta heroes weep: Visage is one such example, but also Beastmaster and Lycan drafts can be unpleasantly surprised by their inability to burst down targets. It is also incredibly powerful against Phantom Lancer or other Illusion heroes.

Ideally, you want your position three to build it, but the current meta is all about greedy offlane damage dealers and the item doesn’t really suit them. Your position four will also typically want to rush a Blink Dagger, so the responsibility might fall on your shoulders.

There is a myth that Chen is an extremely hard to play hero and it was true for a very long time. It is still probably true if you want to squeeze 110% out of the hero, since our “easy way” doesn’t really cover cases where War Stomp is going to be the strongest tool at your disposal, if, for example, your team lacks stuns. Or when your lane will need Vex to kill a mobile enemy hero.

It does highlight how effective the hero can be even if you don’t take any active skills, just through auras alone. Or when you take low-maintenance skills like Ogre Frostmage armor.

Do not be intimidated or dissuaded from trying the hero out: Dota is beautiful precisely because there are so many incredibly unique and diverse heroes and maybe you will discover your new favorite hero by trying Chen out. Well done! Sometimes you could do better by reducing build complexity You can check my builds. I take Top 1 rank on opendota My favorite hero. So glad it is playable now. But tbh I dont think you can squeeze 110% now. Auras are much better and consistent, but I really miss the days of 1 net + stomp combos for flashy ganks, which is complete dogsh1t now compared to auras. But the ancient shard was very wellcome. 1 trick Chen here, check out my builds for good ideas @tombaugh
Damn son you can play Chen and Meepo, why are you still in Archon?
Try to get a party of 5 and reach Divine in no time useful. I'm able to play some micro but ended up not playing Chen much. main problem is I'm too lazy to learn each tooltip on each creep espicially the jungle strike back patch. Your summarize is simple(r) to digest.