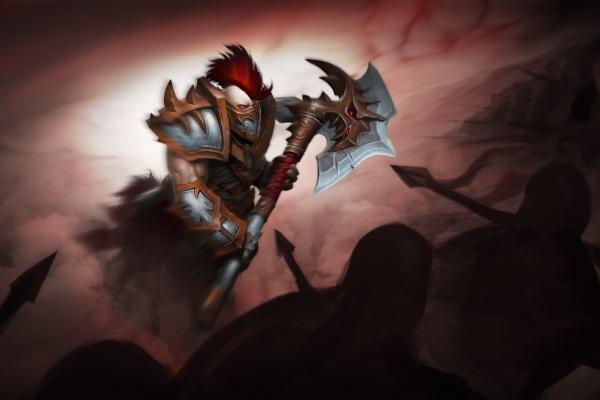 When Icefrog deleted Necronomicon from the game he executed a sort of hard reset on the offlane meta. Just before the patch dropped there simply wasn’t a better option than a Beastmaster with a Necro book. Throughout patch 7.28 we had seen some interesting trends of ranged offlaners like Viper, Outworld Devourer as well as more traditional team fighters such as Tidehunter. In most games though, you’d just prefer to have a Beastmaster.

Ever since his shift to a weird spell casting mid hero, the doors have opened for a lot of offlane classics. Midlane becoming a bit more self-sufficient has also freed up the position four to support the offlane more consistently. The tank archetype has surged back to popularity alongside the brawling initiator. This is a meta shift that seems partially due to a more static laning stage that enables beefcakes like Centaur, Slardar and Axe to hit their early timings and partially because team fight items have seen some buffs.

Here are some offlane heroes to keep an eye on as the patch 7.29 meta continues to develop.

Centaur seems to be far and away the most sought after offlane hero in patch 7.29. This beefy brawler has always been pretty good on paper but needs a few minutes of support to get off the ground. Centaur has actually been getting pretty consistently buffed since 7.27 and received another round of juice in 7.29. At this point, his ability to lane, team fight and initiate all seem to have reached a point of dominance.

Truthfully, Doom has always been a viable hero. Creating gold from nothing and deleting an enemy hero from the game during a team fight will always be strong mechanics in Dota. In 7.29 however, Doom got a pretty significant rework to his early game mechanics. Armor, turn rate and attack time buffs have made his atrocious level one and two much more on par with other brawling offlaners. Other than that, the hero basically appears to just have had his damage output ramped up across his entire kit of abilities. Doom remains a great anti-carry option and will likely grow in popularity throughout 7.29.

Continuing the trend of beefy brawlers, Slardar has sprinted back into the meta. A great counter to popular carries like Lifestealer and Juggernaut, Slardar’s place in the offlane is secure as long as he gets some support in lane.

Remnants of the 7.28 meta, we are still seeing heroes like Tidehunter and Mars get a lot of play in 7.29. Their huge area controlling spells continue to prove valuable for fighting around the Roshan Pit.

In some ways, Dark Seer is the ultimate offlane hero. An aura buying, teammate buffing, team fighting monster, Dark Seer has almost zero ability to carry the game by himself. However, he makes up for this lack by creating inordinate amounts of space for his team. Give a Dark Seer a few easy levels early on and he will completely take over the middle of the game. Dark Seer’s consistent lane pressure, massive team fighting ability and the potential to turn an enemy’s strength against all fit perfectly into the offlane role. Several rounds of buffs to his abilities and a sneakily effective Aghanim’s Shard have pushed this pointy headed pipsqueak into relevance once again.

Sand King is kind of like a Dark Seer who can actually win the game for his team. With support, Sand King can be a viciously powerful laner that transitions into a team fight winning initiator. Icefrog has been slowly buffing Sand King’s damage output for a while now and the Epicenter cast animation change is one of the best buffs the hero has ever gotten. Crixalis is a powerful team fighting hero that can turn up the tempo and punish greedier drafts when necessary as well.

It’s impossible to talk about the offlane without mentioning Dawnbreaker right now. Easily the most played hero in 7000+ MMR pubs and clearly one of the tankiest heroes in Dota, Dawnbreaker is really just broken in general. All of her stats and damage numbers are too high in the early game and adding global impact to a team fighting, aura carrying monster is proving to be immensely strong. There isn’t much more to say than, pick Dawnbreaker before she gets over nerfed in the next patch and reap the rewards.

The big rework to Broodmother scared off all but the hardest core Arachnerds. Pro players like iceiceice and Monkeys Forever, who have always enjoyed ruining the fun for others, are spamming the new Brood in their pubs with massive success. It’s not hard to see why either. The new Brood has lost her ability to build up a Spiderling army until level six, which just so happens to be around the time she wanted a big one anyway. In exchange for this “nerf” she now has infinite sustain in the laning stage between her Web health regeneration and Insatiable Hunger. Reminder, Insatiable Hunger was her ultimate and now gives her a Satanic on demand at any level. Icefrog has also decided that Broodmother was too reliant on items like Diffusal Blade to catch and kill her prey so now she has a slow that also amplifies the damage of her Spiderling army. How fun!

Tell us in the comments below who your top offlaners for 7.29 are.

First is too short (minimum is 6 characters) I will love dawnbreaker even with a 40% winrate. She is finally what omniknight alsways should've been! Tanky, holy and dealing damage! I love that mix of heal and DMG! There is no pudge, because he is always tier S hero. where is that ET offlane? How about LC and her pretty insane shard? how do u skip axe